Watch out Mr. Hare: This tortoise is shell on wheels

Watch out Mr. Hare: This tortoise is shell on wheels

Watch out Mr. Hare: This tortoise is shell on wheels.

A 12-year-old African tortoise who recently had his front left leg amputated due to injury is now moving just fine, thanks to a swiveling wheel attached to his shell by doctors at Washington State University's veterinary hospital.

The 23-pound tortoise, named “Gamera” after the giant flying turtle of the old Japanese monster movies, is gaining weight and generally thriving with his new appendage.

“I don't know whether he'd pass the hare, but he moves around very well,” said Charlie Powell, spokesman for WSU’s veterinary hospital in Pullman, Wash.

The nearly teenage mutant turtle is particularly good at moving toward food, and has gained 3 pounds since the wheel was attached, Powell said.

The caster-style wheel should last for years before it has to be replaced, he said.

Powell said that because the wheel swivels like a caster, it allows Gamera to move well on both flat and lumpy surfaces like lawns.

The African spur-thighed tortoise was brought to the WSU hospital in April by its owner, suffering from a severe leg injury with an unknown cause, WSU officials said. The injury was life-threatening, so the leg was amputated at the shoulder.

Veterinarians attached the wheel to the tortoise's shell using an epoxy adhesive, and the animal took to the new device immediately, WSU officials said.

The tortoise is part of a larger group called sulcata tortoises that are popular as exotic pets in the United States. The largest such tortoise on record topped 232 pounds. The oldest known sulcata tortoise in captivity is 56 years old. 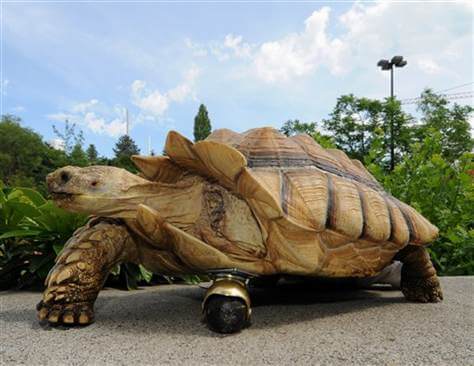