Despite their name, Green Iguanas can come in different colors. In southern countries of their range, such as Peru, green iguanas appear bluish in color with bold black markings. On islands such as Bonaire, Curaçao, Aruba, and Grenada, a Green Iguana's color may range from green to lavender, black, and even pink. Green Iguanas from the western region of Costa Rica are red and animals of the northern ranges, such as Mexico, appear orange.  Juvenile Green Iguanas from El Salvador are often bright blue as babies, however they lose this color as they get older.

Despite their name, Green Iguanas can come in different colors. In southern countries of their range, such as Peru, green iguanas appear bluish in color with bold black markings. On islands such as Bonaire, Curaçao, Aruba, and Grenada, a Green Iguana''''s color may range from green to lavender, black, and even pink. Green Iguanas from the western region of Costa Rica are red and animals of the northern ranges, such as Mexico, appear orange. Juvenile Green Iguanas from El Salvador are often bright blue as babies, however they lose this color as they get older.

Iguana iguana possess a row of spines along their backs and along their tails which helps to protect them from predators. Their whip-like tails can be used to deliver painful strikes and like many other lizards, when grabbed by the tail, the iguana can allow it to break, so it can escape and eventually regenerate a new one. In addition, iguanas have well developed dewlaps which helps regulate their body temperature. This dewlap is used in courtships and territorial displays.

Green Iguanas have excellent vision, enabling them to detect shapes and motions at long distances. As Green Iguanas have only a few Rod cells, they have poor vision in low-light conditions. At the same time, they have cells called "double Cone cells" that give them sharp color vision and enable them to see ultraviolet wavelengths. This ability is highly useful when basking so the animal can ensure that it absorbs enough sunlight in the forms of UVA and UVB to produce Vitamin D.

Green Iguanas have a white photosensory organ on the top of their heads called the parietal eye (also called third eye, pineal eye or pineal gland), in contrast to most other lizards, which have lost it. This "eye" does not function the same way as a normal eye does, as it has only a rudimentary retina and lens and cannot form images. It is, however, sensitive to changes in light and dark and can detect movement. This helps the iguana when being stalked by predators from above.

Green Iguanas have very sharp teeth that are capable of shredding leaves and even human skin. These teeth are shaped like a leaf, broad and flat, with serrations on the edge. The similarity of these teeth to those of one of the first dinosaurs discovered led to the dinosaur being named Iguanodon, meaning "iguana-tooth", and the incorrect assumption that it had resembled a gigantic iguana. The teeth are situated on the inner sides of the jawbones which is why they are hard to see in smaller specimens.

Primarily herbivorous, Green Iguanas are presented with a special problem for osmoregulation; plant matter contains more potassium and as it has less nutritional content per gram, more must be eaten to meet metabolic needs. As Green Iguanas are not capable of creating liquid urine more concentrated than their bodily fluids, like birds they excrete nitrogenous wastes as urate salts through a salt gland. As a result, Green iguanas have developed a lateral nasal gland to supplement renal salt secretion by expelling excess potassium and sodium chloride.

Green Iguanas from Guatemala and southern Mexico predominantly have small horns on their snouts between their eyes and their nostrils, whereas others do not. Naturalists once classified these iguanas as a separate subspecies (Iguana iguana rhinolopha); however, this classification has been found to be invalid based on mitochondrial DNA and iguanas with similar nose projections appear randomly in other populations and interbreed freely with those that do not share this trait.

The Green Iguana is a large lizard, typically growing to 1.5 metres (4.9 ft) in length from head to tail. Some specimens have been measured upwards of 2 metres (6.6 ft) with bodyweights greater than 20 pounds (9.1 kg).

When frightened by a predator, Green Iguanas will attempt to flee, and if near a body of water, they dive into it and swim away. If cornered by a threat, the Green Iguana will extend and display the dewlap under its neck, stiffen and puff up its body, hiss, and bob its head at the aggressor. If threat persists the Iguana can lash with its tail, bite and use its claws in defense. The wounded are more inclined to fight than uninjured prey.

Green Iguanas use "head bobs" and dewlaps in a variety of ways in social interactions, such as greeting another iguana or to court a possible mate. The frequency and number of head bobs have particular meanings to other iguanas.

Green Iguanas are preyed upon by hawks and their fear of hawks is exploited as a ploy to catch them in the wild. The sound of a hawk's whistle or scream makes the iguana freeze and it becomes easier to capture.

Green Iguanas are primarily herbivores, feeding on leaves, flowers, fruit, and growing shoots of upwards of 100 different species of plant. In Panama one of the Green iguana's favorite foods is wild plum, Spondias mombin.

Although they will consume a wide variety of foods if offered, Green Iguanas are naturally herbivorous and require a precise ratio of minerals (2 to 1 calcium to phosphorus) in their diet. Juvenile iguanas often eat feces from adults in order to acquire the essential microflora to digest their low-quality and hard to process vegetarian only diet.

There is some debate as to whether captive Green Iguanas should be fed animal protein. There is evidence of wild iguanas eating grasshoppers and tree snails, usually as a byproduct of eating plant material. Wild adult Green Iguanas have been observed eating bird''''s eggs. Zoologists, such as Adam Britton, believe that such a diet containing protein is unhealthy for the animal's digestive system resulting in severe long-term health damage including kidney failure and leading to premature death. On the other side of the argument is that Green Iguanas at the Miami Seaquarium in Key Biscayne, Florida, have been observed eating dead fish and individuals kept in captivity have been known to eat mice without any ill effects. De Vosjoli writes that captive animals have been known to survive and thrive on eating nothing but whole rodent block, or monkey chow, and one instance of Romaine lettuce with vitamin and calcium supplements.

Male Green Iguanas have highly developed femoral pores on the underside of their thighs which secrete a scent (females have femoral pores, but they are smaller in comparison to those of the males). In addition, the dorsal spines that run along a Green iguana''''s back are noticeably longer and thicker in males than they are in females, making the animals somewhat sexually dimorphic.

Green Iguanas are oviparous with females laying clutches of 20 to 71 eggs once per year during a synchronized nesting period. The female Green iguana gives no parental protection after egg laying, apart from defending the nesting burrow during excavation. In Panama, the Green iguana has been observed sharing nest sites with American crocodiles and in Honduras with Spectacled Caimans.

The hatchlings emerge from the nest after 10-15 weeks of incubation. Once hatched, the young iguanas look similar to the adults in color and shape, resembling adult females more so than males and lacking dorsal spines.

Juveniles stay in familial groups for the first year of their lives. Male Green iguanas in these groups often use their own bodies to shield and protect females from predators and it appears to be the only species of reptile which does this.

The species was first officially described by Swedish botanist Carl Linnaeus in 1758. In the two centuries since then, no less than 17 species and subspecies have been identified with all but one species (Iguana delicatissima) being found to be invalid.

Using nuclear and mitochondrial DNA-sequence data to explore the phylogenic history of the green iguana, scientists from Utah Valley State College studied animals collected from 17 different countries. The topology of phylogeny indicated that the species originated in South America and eventually radiated through Central America and the Caribbean. The study revealed no unique mitochondrial DNA haplotypes for subspecific status but did indicate the deep lineage divergence between Central and South American populations.

The word iguana is derived from a Spanish form of the Taíno name for the species: iwana. In some Spanish speaking countries, males of the species are referred to as gorrobo or ministro and juveniles are called iguanita or gorrobito.

The native range of the Green Iguana extends from southern Mexico to central Brazil, Paraguay, and Bolivia and the Caribbean; specifically Grenada, Curaçao, Trinidad and Tobago, St. Lucia, St. Vincent, and Útila. They have been introduced to Grand Cayman, Puerto Rico, Texas, Florida, Hawaii, and the United States Virgin Islands.

Green Iguanas are diurnal, arboreal, and are often found near water. Agile climbers, Iguana iguana can fall up to 50 feet (15 m) and land unhurt (iguanas use their hind leg claws to clasp leaves and branches to break a fall). During cold, wet weather, green iguanas prefer to stay on the ground for greater warmth. When swimming, an iguana remains submerged, letting its four legs hang limply against its side. They propel through the water with powerful tail strokes.

Because of the Green Iguanas popularity in the pet trade and as a food source in Latin America, they are listed on the CITES Appendix II, which means that while they are not an endangered species, "their trade must be controlled so as to not harm the species in the future". 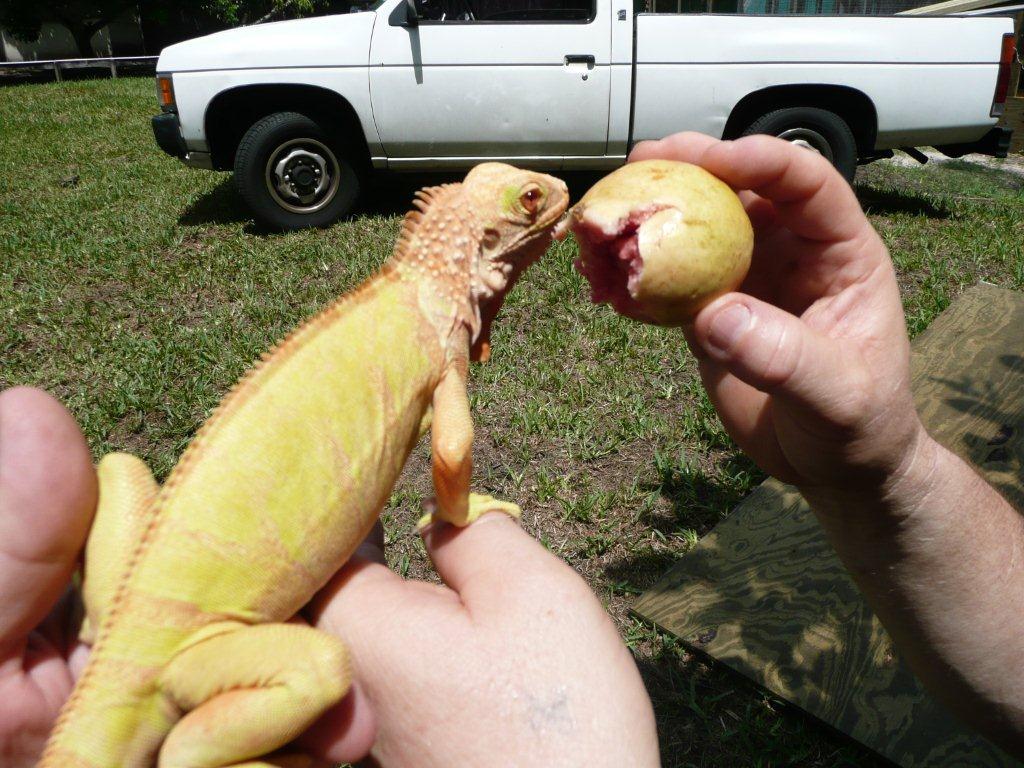 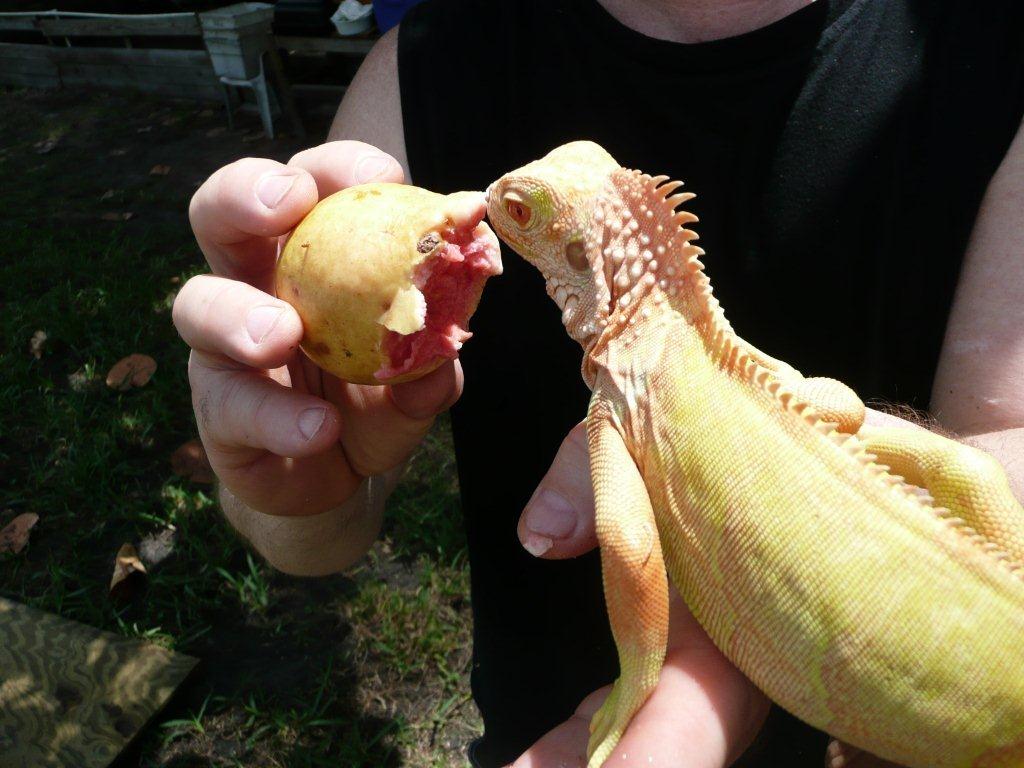 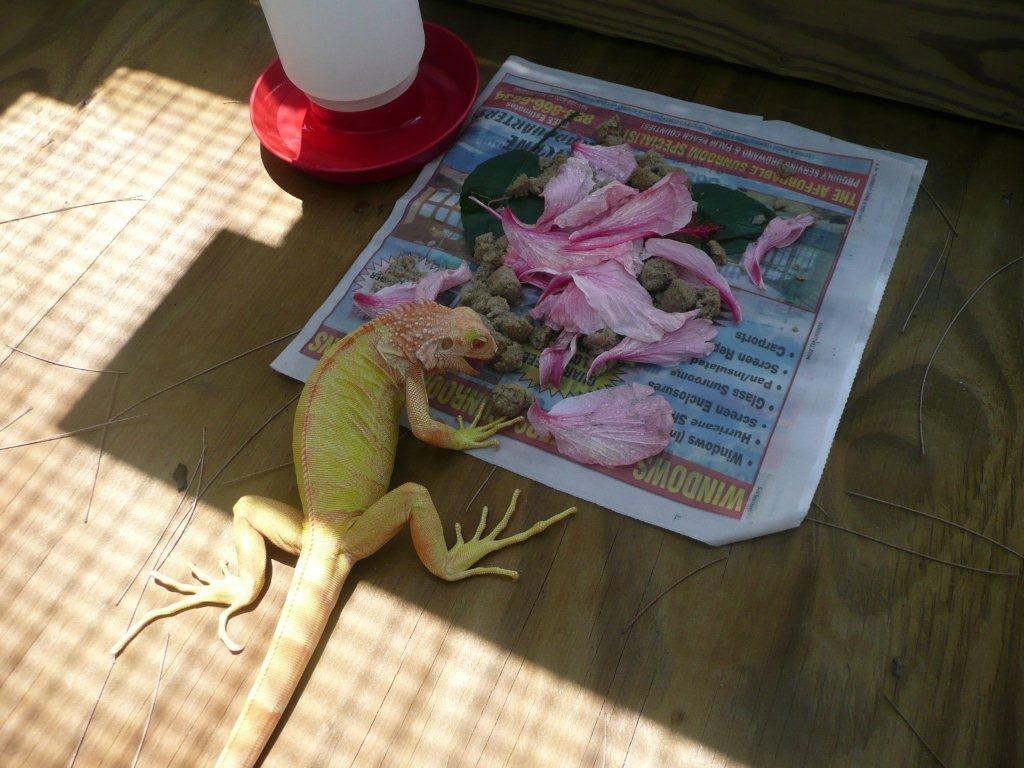 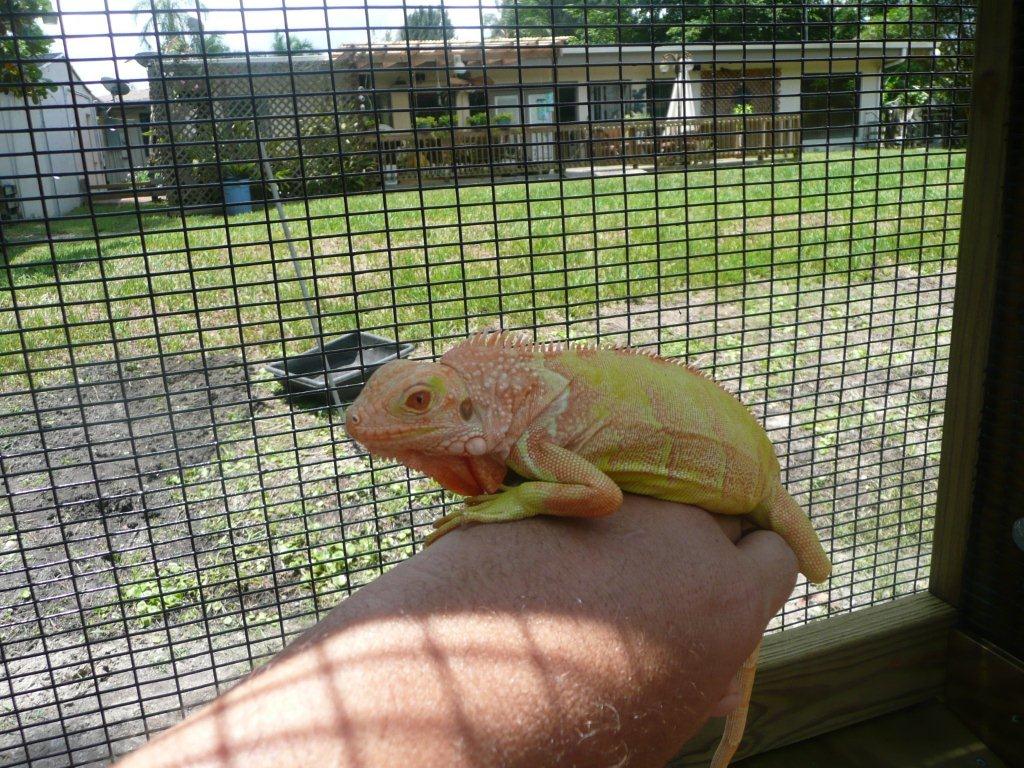 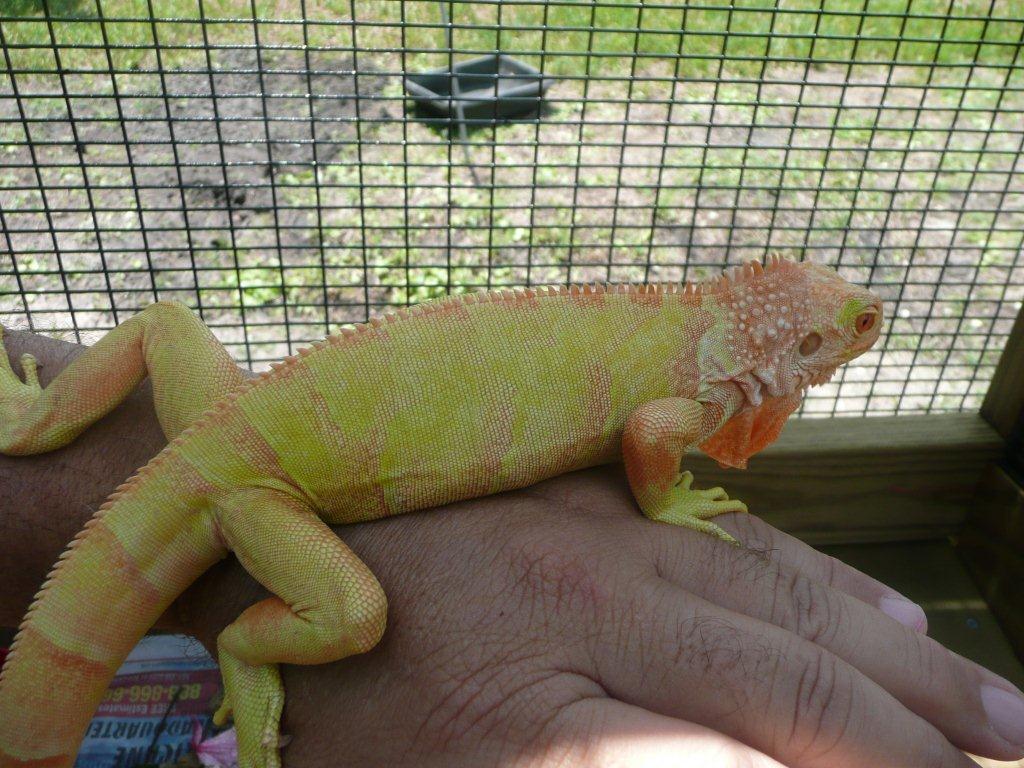 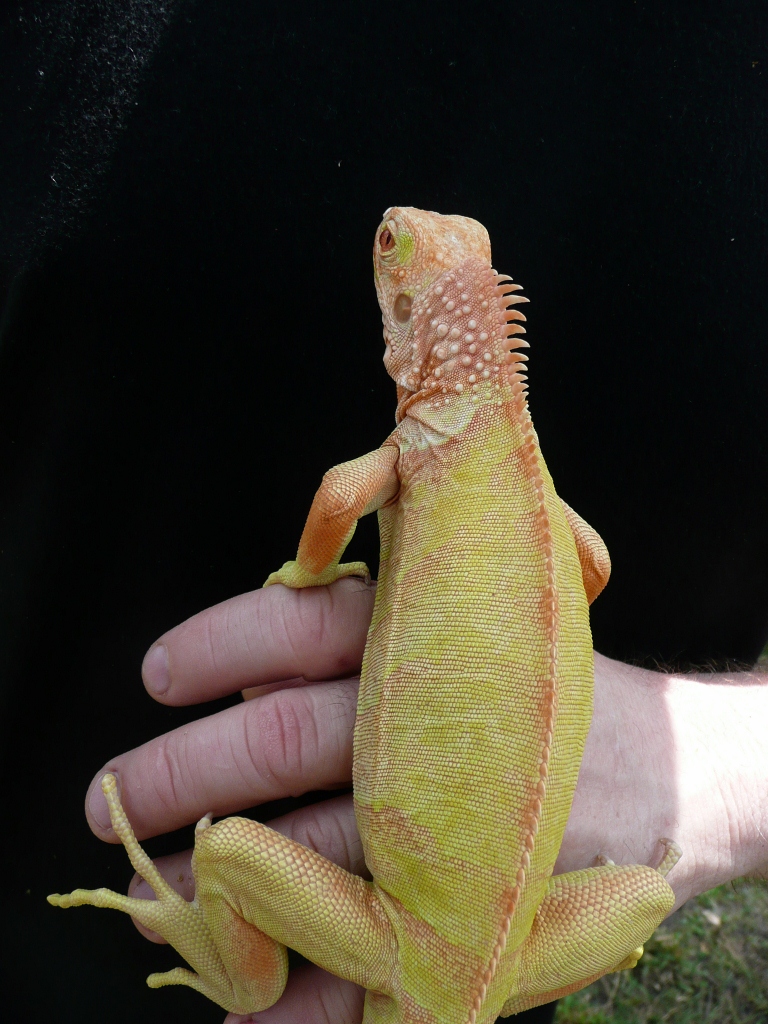 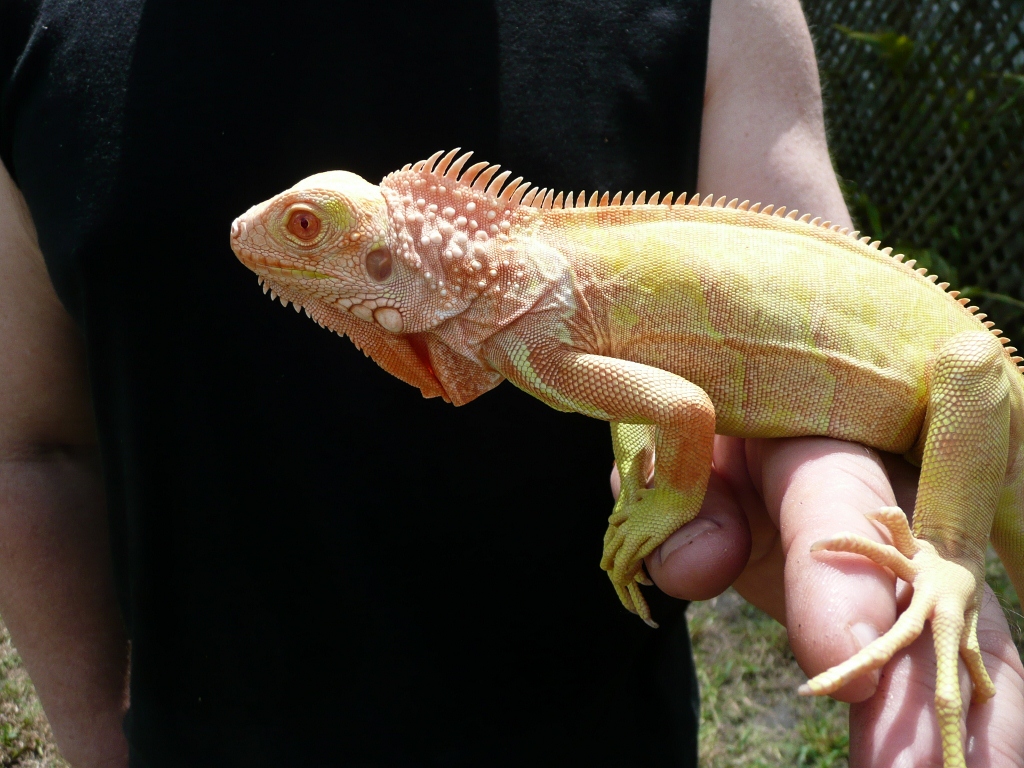 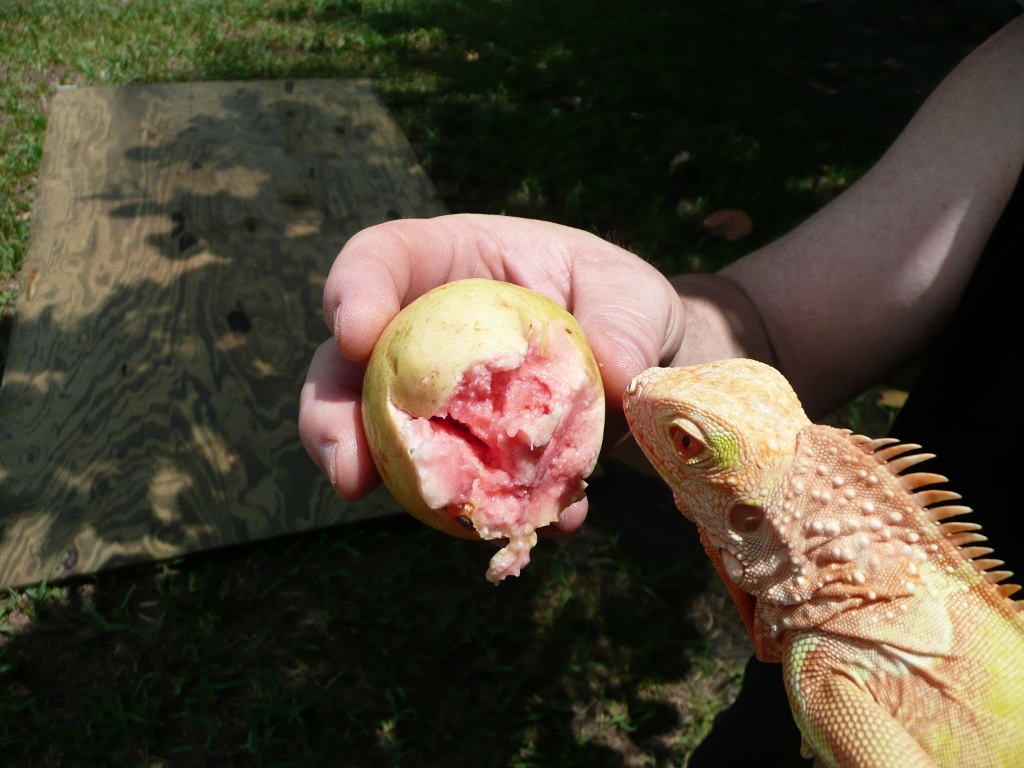 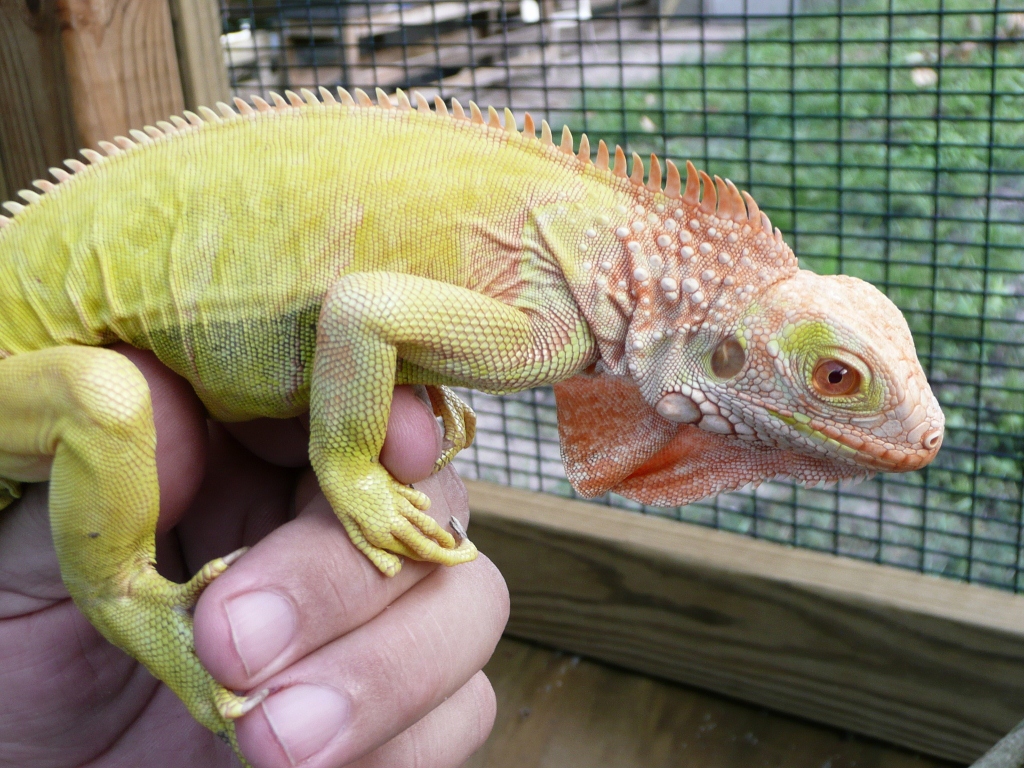 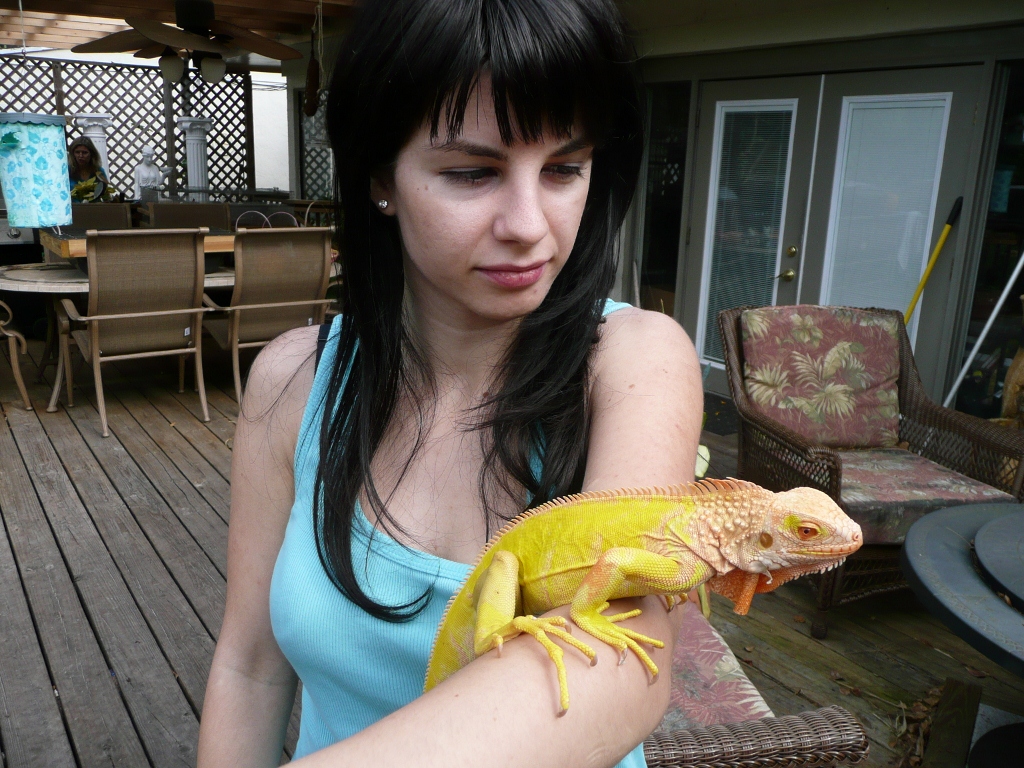 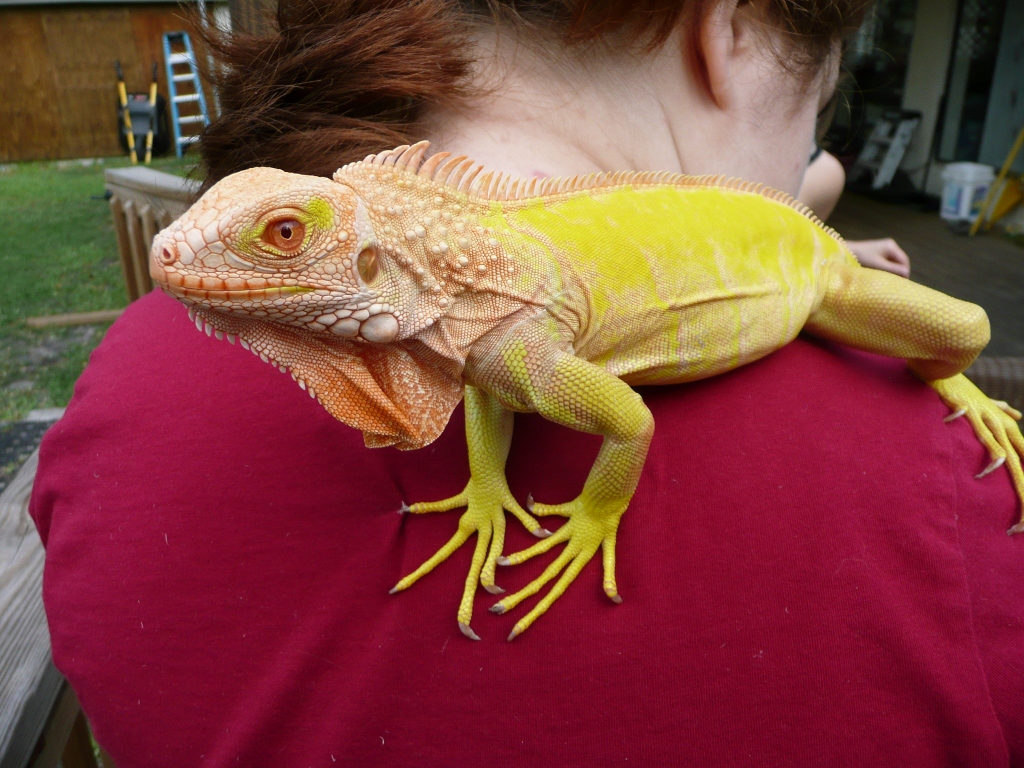 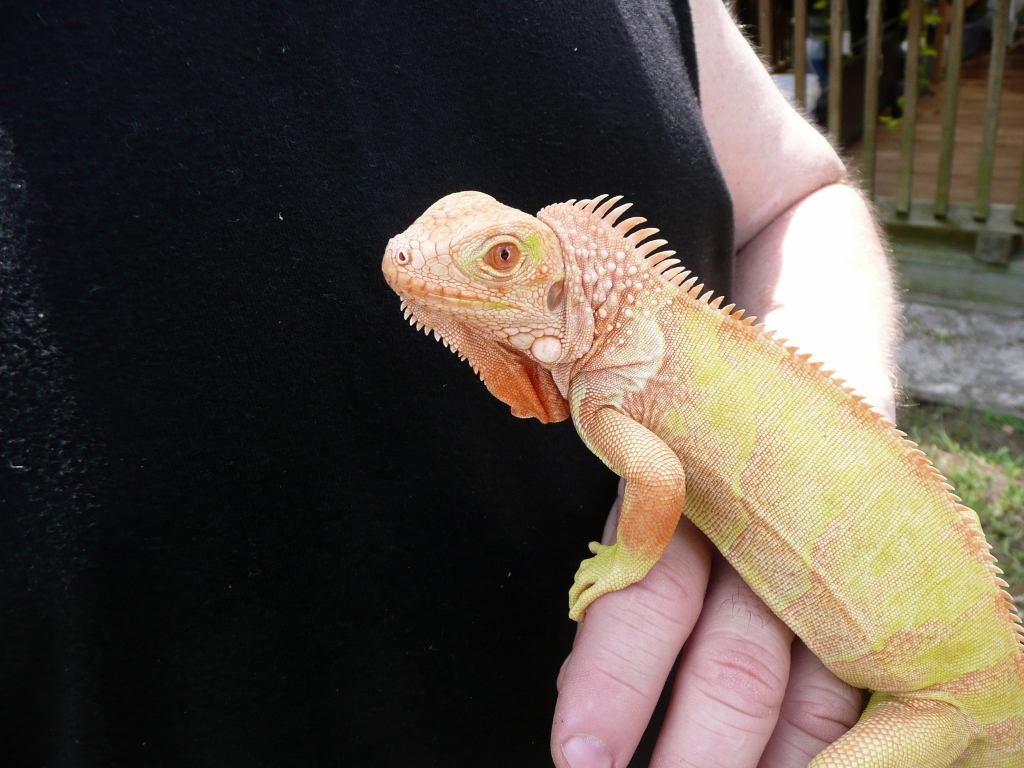 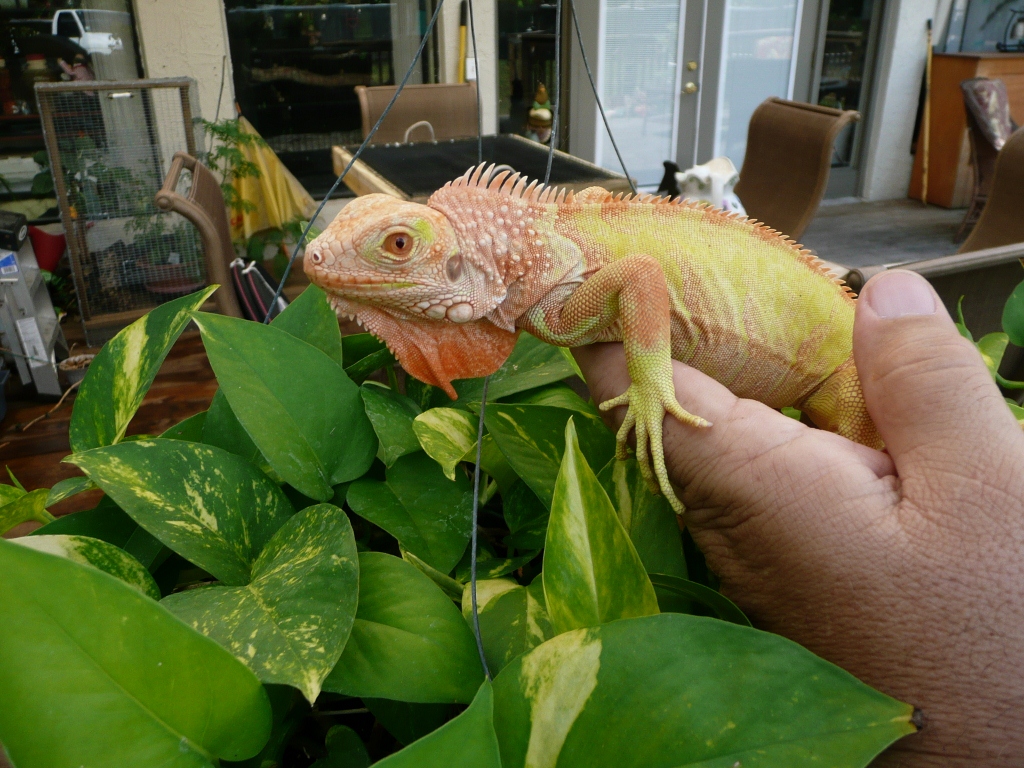 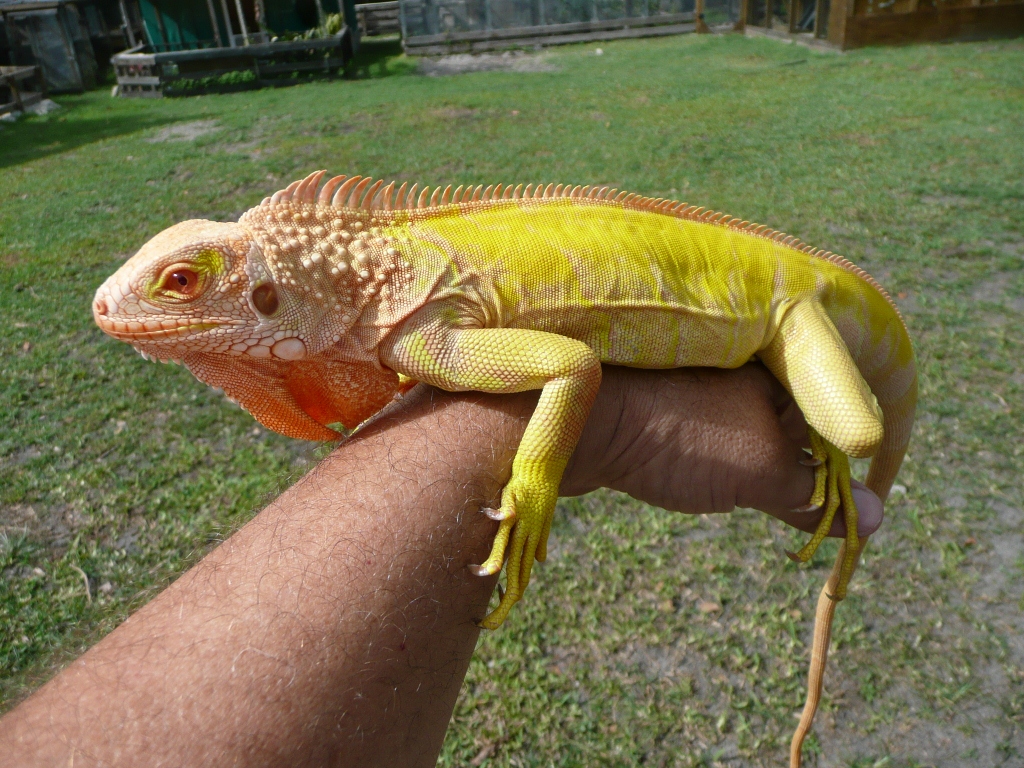