A: Well I have a funny store like that. I had eight young adult Aldabras in a pen now as things are, there are times of the year when all they think about is how to get out of that cage. I have had them dig under a fence till they could get their shell under the bottom board and just lift the fence post (with cement) out of the ground. I have had them simply break through and I have had them slid the gates open I have also had then jump over a four foot fence.

I raised eight of them from hatchlings 24 years ago. I continually had to increase the height of the fence or they would climb it and jump over.

One day they came up with a new way of doing things, and as many times as I have told this story few believe me, but I have seen this behavior too many times to think it just chance. Especially given that Aldabras the most social tortoises I have ever seen and by social I mean between and amongst themselves.

See my thread on Monday about the “behavioral difference between Galapagos and Aldabras”.

Anyway back to the story. One rainy day one of the Aldabras parks himself at the base of the gate (The lowest part of the fence) then another one stood on his back

Slid the top rail over and jumped over the fence. Then over the next few minutes each and every one of them jumped the fence then he simply got up and climbed over the now partly open gate.

The good part of this story is, I caught it on my security cameras.

The bad part of the story is by some mean twist of fate, I lost the last part and I think you see only 5 escape. 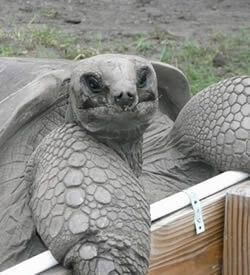